Homes for All Lieutenant Governor Candidates Forum on Housing a Success 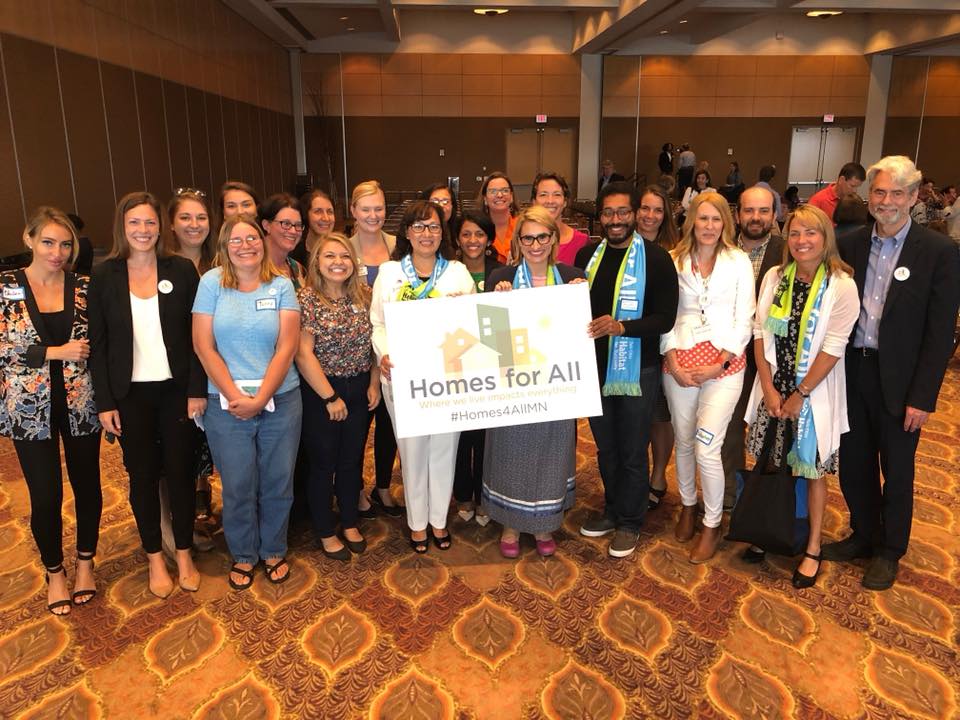 The following blog was written by Pam Johnson, Policy and Advocacy Manager at Twin Cities Habitat for Humanity, a Homes for All MN coalition member. It was originally posted here.

As Minnesotans educate ourselves about who to vote for on November 6 in the coming weeks, we just learned a lot more from the two top candidates running for the Lieutenant Governor seat at a well-attended September 12 Housing Forum in Duluth.  Candidates Donna Bergstrom (running with Jeff Johnson for Governor) and Peggy Flannagan (running with Tim Walz for Governor) responded to questions proposed from Homes for All Coalition members and a statewide viewing audience via Uptake livestreaming.  Habitat joined other Homes for All partners in using the forum to frame housing as an important economic driver in our state, critical to Minnesota’s future growth and prosperity.  Missed the event?  You can watch the UpTake livestream recording here.

Duluth Mayor, Emily Larson, kicked off the event with a strong pitch for affordable housing statewide.  She served on the Governor’s 2018 Housing Task Force, which recently released its final report, “More Places to Call Home, Investing in Minnesota’s Future.”  Mayor Larson highlighted six key recommendations, which included a commitment to supporting and strengthening pathways to homeownership. She emphasized the need for public, private, philanthropic and community efforts to ensure that all Minnesotans have a pathway out of homeless through a significant boost to our continuum of housing services and production of rental and homeownership opportunities.

As they were interviewed, both Bergstrom and Flannagan learned about Homes for All successful 2018 legislative campaign to secure a record $120 million in affordable housing bonds, and both agreed to strong support for housing bonding if elected.  Each described their personal journey and current efforts to support affordable housing.  Both acknowledged the importance of a safe stable home for healthy youth development.

Donna recounted her 20 years of service in the Marines as an intelligence officer, work as a benefits coordinator for the Fond du Lac tribe and service on the Lutheran Social Services Center for Changing Lives Board. She expressed a passion for kids growing up healthy, and that fueled her successful work to help secure youth homelessness prevention funding.  Peggy described how her world view was forged as a child growing up in subsidized housing, and this lens informed her work as the Children’s Defense Fund Executive Director and state legislator. She said that as a “recovering Executive Director” she is well informed of the myriad of organizations and services that form Minnesota’s safety net and continuum of housing services.

Both candidates underscored the need to “work across the aisle” with members of all political parties, and to forge new and sometimes unlikely partnerships to achieve policy goals.  On the topic of homeownership, Donna Bergstrom was asked about her perspectives of the Governor’s Task Force report on strengthening pathways to homeownership, with a focus on removing barriers for households of color. (Visit the UpTake recording at 14:29 for a five minute response to this question). Bergstrom responded that this was a “perfect example of one of the roles of government—to ensure that the playing field is equal, and that everyone has an opportunity to achieve homeownership if that is what they want.”  She offered the example of a successful federal model to end veteran homelessness through a partnership between HUD and the Veterans Administration, called “Housing First.” Bergstrom also talked about the need to address regulatory restrictions at the local level, which can prevent housing development.

A question was posed to Peggy Flannagan about how a Walz-Flannagan ticket would respond to the 2018 Homes for All legislative priorities to create more homes through: state support for local housing trust funds, creation of a state tax credit for rental and homeownership development, and expansion of the Workforce Home Ownership in MN (WHOM) program (visit the UpTake recording at 42:43 for a two minute response to this question). She noted her pride in co-authoring a bill this past legislative session to create support for local housing trust funds to ensure both preservation and new development of homes, underscoring the need for geographic equity.  She also spoke later  (at 58:48) about the need to “get real about bonding funding of at least $300 million per year ongoing.”

We continue to encourage you to put on your advocacy hat for Habitat and other affordable housing partners by making housing an election issue this fall.  You can help spread the word among your friends, family, and candidates for office by downloading and printing a postcard we created for you, to share some facts about housing and what can be done. The postcard also provides information about where, when, and how to vote and a link to mnvotes.org for more information. Thank you for all you do to make homeownership possible for more Minnesota families!

It is an honor to carry this bill and work with Catholic Charities, our Veterans, and partners. Thank you for allow… https://t.co/4vUxEi1CZr

Homes for All is a statewide coalition that advances shared policy initiatives that lead to housing stability for all Minnesotans. Homes for All supports statewide investment across Minnesota's Housing Continuum.

Learn More
Homes for All is a statewide coalition that advances shared policy initiatives that lead to housing stability for all Minnesotans.
Copyright © 2016 - 2023 Homes for All MN